I got baptized as a 9-ish year old kid (I have a terrible memory when it comes to dates). I remember going through class about what it meant to be a Christian and part of my church and what baptism was. I was the youngest person in my class by about 15 years, except for Claude. Claude was an 8-ish year old kid.

When I climbed into the giant baptismal (that made for an AWESOME hiding place as a kid), I was barely tall enough to be seen by the rest of the congregation. I was nervous – partially because I’m not a very good swimmer and partially because I wasn’t sure if I was going to get water up my nose (again, I was 9-ish). I was totally focused on how I was going to breathe and starting to feel ready. The pastor asked me, “Do you have a special verse that you want to share with the congregation?”

WHOA. Not ready for that curveball, Pastor. You should have warned me if you wanted me to say anything. “No.” Is what I squeaked out. (Claude, one year my younger, rattled off John 3.16 which my mom later told me is that I should have done at least. Claude could also probably swim better and wasn’t afraid of having to be saved from drowning in 2 feet of water.) The pastor smiled and held my nose (*whew*) and pushed me under water demonstrating my belief in the death, burial, and resurrection of Jesus. As I came out of the water, the rest of the church said a hearty, “amen.”

Fast forward nearly 20 years – I have the awesome opportunity to be a part of the baptism service at my church. It’s trouble really, because I have a hard enough time keeping back the flood of emotions as people get dunked in inflatable hot tubs and jump out of the water, arms in the air, droplets going everywhere. They’re so proud and so excited to show the world their love for Jesus and desire for a better way to live. 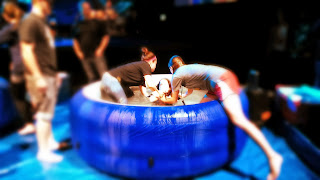 It looks a lot different than the way I was baptized. My partner (because I weigh about 112 pounds soaking wet and have the muscle mass of a tree squirrel) and I introduce ourselves to the people who climb into the inflatable hot tub (it’s… like a baptistry).  We ask if they believe in the Lord Jesus Christ as their Savior and on their affirmation, we baptize them in His name. People cheer and clap and raise their hands in excitement, running up to hug their soaking wet friend or child or parent.

And in this spectacle of an event, people plunge under water, unafraid of freezing temperatures and who is watching. They’re celebrating.

And they should. Because they get to celebrate the real, awesome life that they found in Jesus. 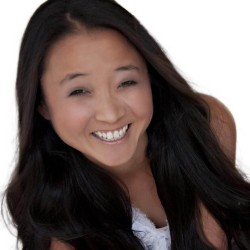